After over a year of deliberating, I've finally moved my blogging to a new site. Thanks for viewing what I have posted and let's continue the journey.

Please visit my new site at http://reflectingforward.weebly.com/
Posted by Rob at 7:58 AM No comments:

There are thousands of mobile apps for sharing images. New to the iPad (but not new to iPhone) is Fuzel Collage.
It's free, though does have some in app purchases that extend functionality, however I've used it a couple of times and have found that the built in functionality is just fine.
It allows you to create a simple collage or to create an animated collage where individual images appear for a few seconds before the final collage is displayed. This to me is where it likely has some really cool applications for knowledge sharing.
Here's a quick look at the interface for putting together a collage from items already on your camera roll. 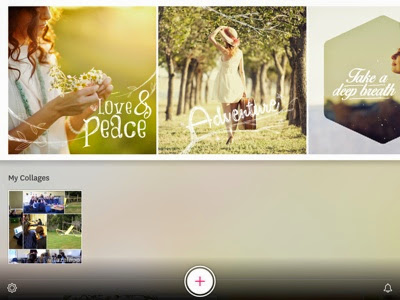 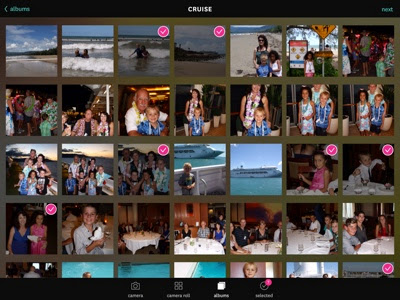 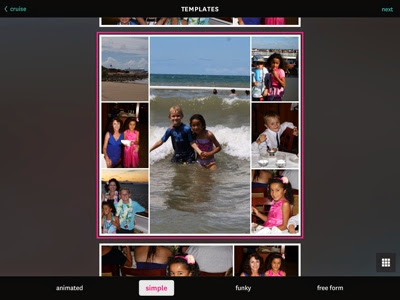 There are plenty of options for arrangement and layout. 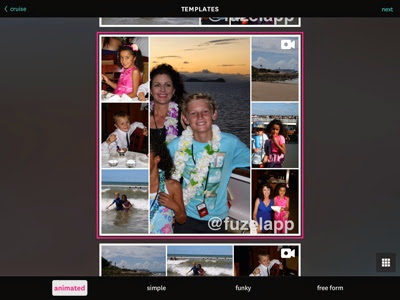 Animation gives the best finish in my opinion. You can choose music from your iTunes account and set the time for the images to arrive in your collage. 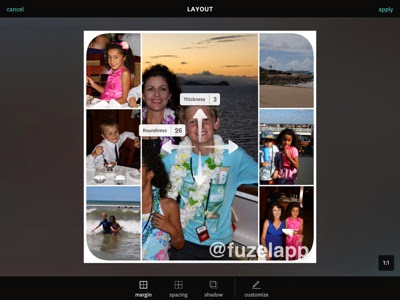 You can edit the layout. 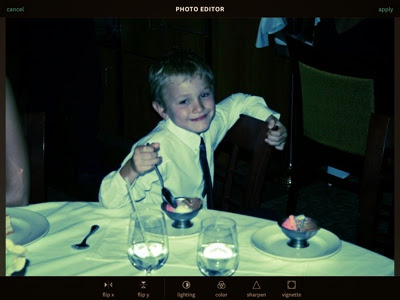 There are many options for editing each image separately on your collage. 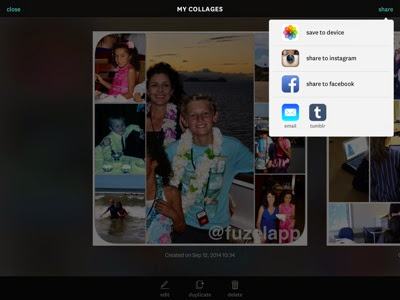 And there are enough options to share your finished masterpiece.
Posted by Rob at 9:15 AM No comments:

Sometimes you wonder what is the point.

I'm annoyed that a set of tools that I love using on my laptop and chromebook are useless on my device of preference, an iPad.

Google today released Slides for iOS and an updated Docs for iOS. They are both pretty much unusable for anything serious on an iDevice. I've waited for ages for Google to deliver some useful editing of Docs on iPad. Because I have a big investment in Docs, Forms and Sheets. On my laptop they have been my goto apps because of the ease of sharing and collaboration; and the functionality (except a table of contents that makes sense) was sufficient for my needs.

But my device of preference is an iPad. And now I'm tired of waiting for the functionality I want. I'm going to ditch Google's mobile apps. They just don't deliver any value.

The way I see it now I have 2 options for creation of documents - Apple's iLife or Microsoft's Office for iPad. Both are far more functional. Neither are what I would like. In reality I'll probably end up using Pages from Apple and Excel from Microsoft. I don't use slide shows much, so I'll probably use Apple's KeyNote if I have to.

You know what would be really cool?
A desktop version of Notability.

The SAMR model is a framework used to evaluate the technology being employed in your classroom. It has been developed by Dr Ruben Puentedura and has become a standard tool for many schools and individuals for reflecting on the use of technology in their classrooms - obviously with the aim of making changes to the tasks that students are working on.


The model is deceptively simple, and the following video shows you the model in 2 minutes, along with an example all the way through.

There are many references to the use of SAMR in schools, both in NZ and internationally. IMHO, SAMR is a really useful framework to help you reflect on what you are doing in your classrooms with technology.
Here are a couple of images that try and explain aspects of SAMR -


This version has Bloom's for comparison sitting around the centre circle, and has a bunch of apps added around the wheel as some way of indicating what might work for various aspects of the model. [Do note that many apps can be used at many levels of any of these models, so the appearance (say) of Google Docs at the bottom right doesn't preclude using Google Docs in conjunction with activities in the upper left section of the screen.]


I've included the following links as places that you should find some value from if you want to explore further.
Using the SAMR model in an NZ school.
Kathy Shrocks guide to SAMR
Using SAMR to teach above the line

Was just going through some of the files I have in iTunesU in advance of a bit of research I'm doing around the use of LMS and similar tools in our environment here at school, and I came across a series of videos I had downloaded from "Learning and Teaching Scotland". Recognising Stephen Heppell as the commentator in these two videos made me have another look at what he said. Haver a listen - what Stephen said in Scotland "way back" in 2008 is still perfectly relevant, and will remain perfectly relevant into the future.

Pay particular attention to the role of the teacher as Heppell portrays it. Do you believe it? I know in my subject area of interest it is so true. Some of my Year 11 students are currently engaged in work and they are producing an output far in advance to the skills I would bring to the same task. But at least I have guided them this far, and I know where their next steps should be, and where they can get the skills they need if I don't have them in my head.

and again on the aspect of Emerging Technologies (note that this was 2008!) 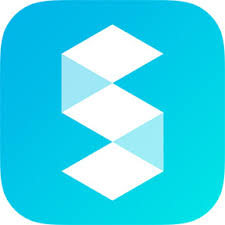 According to the iTunes tag, Storehouse is ...
Share your world through Storehouse. It’s the easiest way to create and discover beautiful stories.
Combine photos, videos, and text to meaningfully document your experiences. Publish your stories for friends and followers, or share them by email, Facebook, or Twitter. Explore stories created by your friends and our community of storytellers from all around the world.
BUILT FOR MOBILE
Storehouse was designed for mobile, from the intuitive touch-based interface to the way we allow you to create and share on-the-go.
UNLEASH YOUR CREATIVITY
We’ve made laying out photos, videos, and text so easy that anybody can create beautiful stories. Easily add photos and videos from your iPad Camera Roll, Dropbox, Flickr, and Instagram. You don’t need to be a designer to put together something stunning.
SHARE YOUR STORIES ANYWHERE
Stories look great on all screen sizes so you can rest easy knowing that you can share them with anyone.
DISCOVER STORIES FROM AROUND THE WORLD
Get inspired by exploring stories created by our global community. Instantly travel the world, learn a new skill, or discover interesting places and people, all from your iPad.
Here's their promo video.

It appears that Storehouse has just won an Apple design award in the past week or two as well. So, I gave it a try.

Firstly, the interface is clean and that usually makes for a simple app. And it pretty much is. The only issue I had was trying to find the embed link ... finally found it on the web view on my laptop - on your iPad is simply gives you the option to open in Safari, but the once there you can get the embed code for your website or blog. IMHO they should have this as an option on the final "publish" page too.

Anyway - here's my simple Storehouse just taken from some random pics from my camera roll. Embedded of course! This app could be used for any story that has plenty of visuals and short video.
Posted by Rob at 3:17 PM No comments:

123D Catch is an AutoDesk product. It's free for your iOS device and there is a web version for your laptop available at http://www.123dapp.com/catch . There is also a PC version that you can download from the same site.

According to the iTunes description ...

Use your camera to capture the people, places and things around you as amazingly realistic 3D experiences. Capture friends, sculptures, buildings or anything else you can photograph. Automatically transform them into interactive 3D models that can be shared with friends, family, and an ever growing community of 3D photographers.• Turn your photos into realistic 3D models by taking a series of photographs from different angles.• Be guided through the process of capturing all angles of your subject with the Integrated Photo Compass.• Capture 3D portraits of your friends, museum displays, architecture, plants, cats or anything else you can photograph.• Share your captures with friends through Twitter, Facebook, Email and SMS.• Showcase your work and follow other amazing 3D photographers from around the world through the in-app gallery.• Store your captured objects in the cloud to access them from all your devices.• Use the 123D Catch web app for healing and 3D printing your captures in a web browser! (123d.autodesk.com/catch)• Export 3D models in a variety of formats from the 123D online community for use in other 3D tools and projects.• Works on your iPad/iPhone & iPod Touch.

I can recall using this app on my iPhone about 12 months ago and being underwhelmed. It was not easy to use and you always seemed to end up with models that were just too buggy for much other than showing that you could capture a 3D image. Since late last year the app has had a major refit and it now has a slick interface and is really easy to use.

In the classroom next to mine the ever creative media studies teacher has been working with year 8 students on stop motion video and they have all these cute little models - including a Sylvanian families house. It looks like this .. 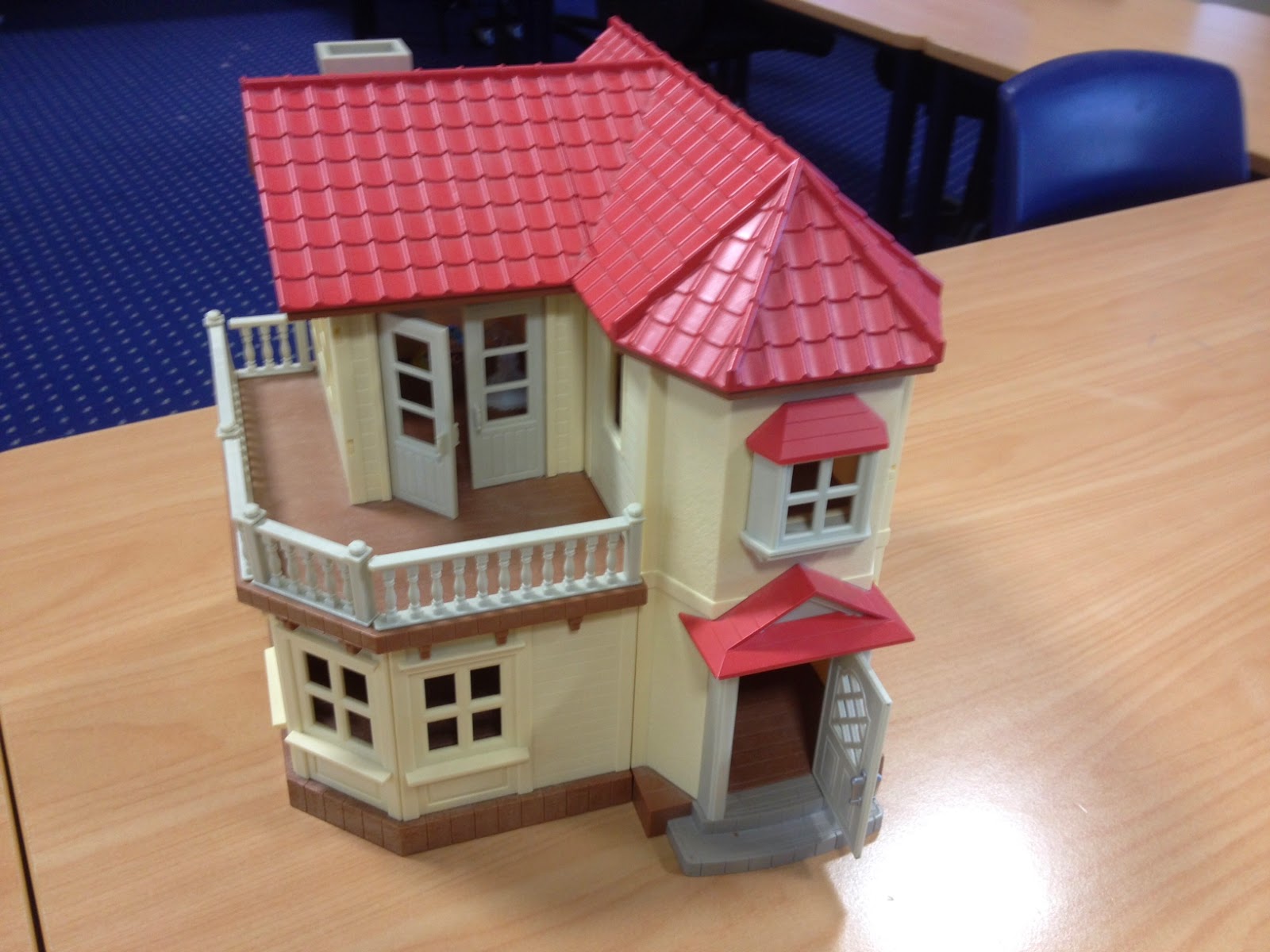 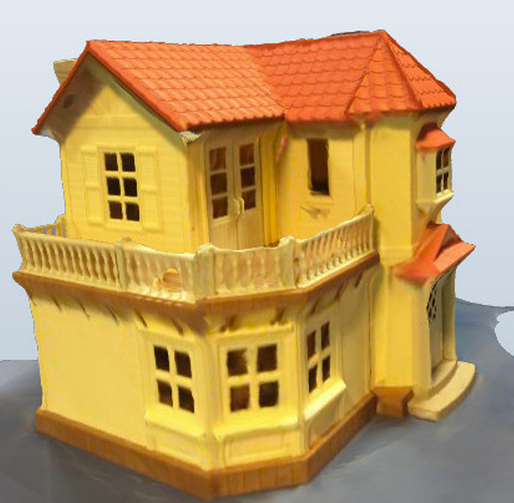 123D Catch lets you download your image in a number of formats. 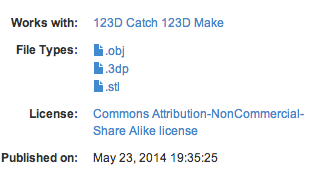 So, I can take the .stl file into our 3D printing software and print out some replacement parts when the doors get broken. 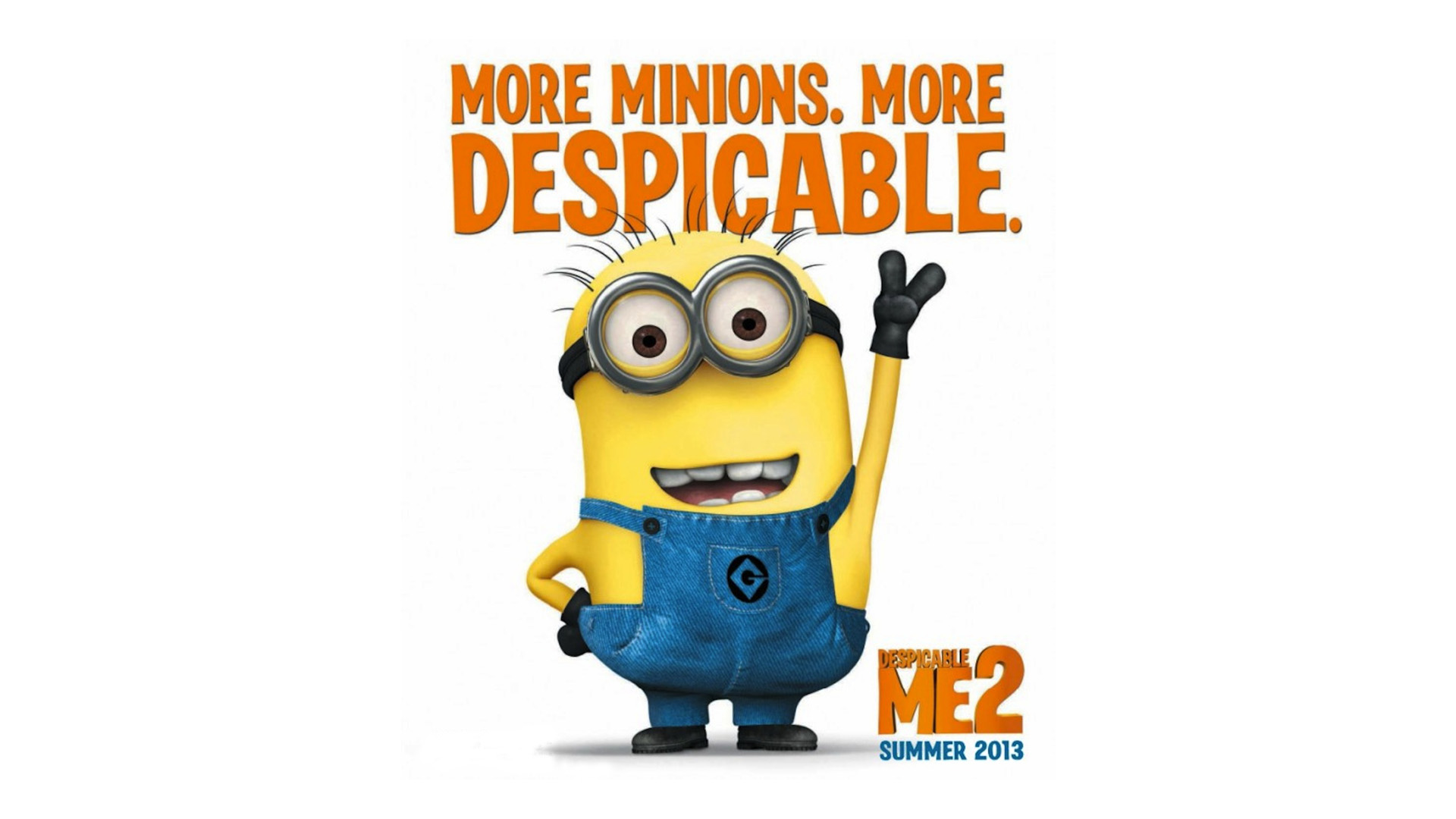 Some of my year 10 students are messing around with 3D modelling, animation and gaming using AutoDesk's Maya and Unity's Unity3D. I am too. Its all new to me, and I'm no a graphic artist. My game is about minions (and zombies) and I need a home base for my minions. So, I can take the mesh file of the Sylvanian house that 123D Catch gives me and take it into Maya, where I can make it the required minion colour. 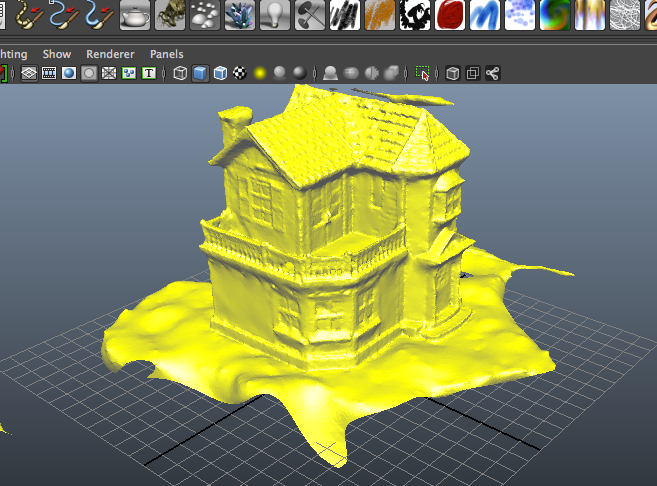 From there I can output as an .fbx file for use in Unity and ... 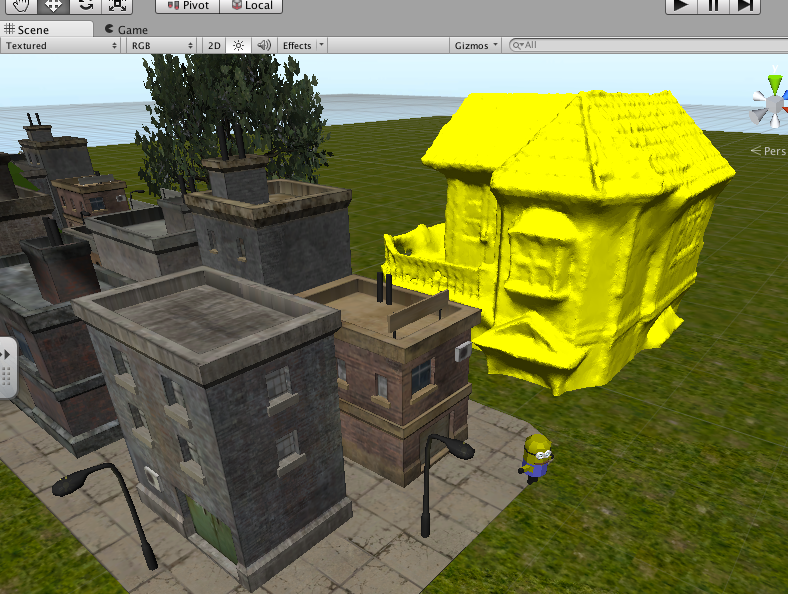 ... I have my minion base just on the outskirts of town! ( and my own minion on the edge of the path ... but that's another story).